One day tour in Bethlehem

after the short 20-minute drive to Bethlehem, see the WALL close up, see the Old City, the Church of Nativity .

Mar Saba Monastery dates from the 5th Century, is a highlight of the tour, and offers spectacular views of the Judean desert 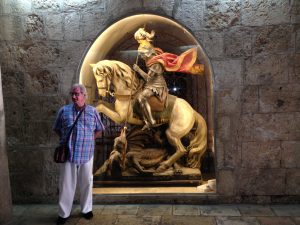 The visit to the Church of the Nativity and the Old city markets of Bethlehem is an important highlight for many of our guests. Please note that we are required to engage one of the official church guides for the walk through the church.

Bethlehem is a Palestinian city in the central West Bank, approximately 10 kilometers (6 mi) south of Jerusalem, with a population of 50,000 people. It is the capital of the Bethlehem Governorate of the Palestinian National Authority.

According to Christian tradition, Bethlehem is the birthplace of Jesus of Nazareth and the town is inhabited by one of the oldest Christian communities in the world, though the size of the community has shrunk in recent years due to emigration. According to Biblical tradition, the city is also believed to be the birthplace of David. The city was sacked by the Romans in 529 AD as a result of a revolt, and was rebuilt by the Byzantine emperor Justinian I. Bethlehem was conquered by the Islamic Caliphate of ‘Umar ibn al-Khattāb in 637, who guaranteed safety for the city’s religious shrines. In 1099, Crusaders captured and fortified Bethlehem and replaced its Greek Orthodox clergy with a Latin one. The Latin clergy were expelled after the city was captured by Saladin, the sultan of Egypt and Syria. With the coming of the Mamluks in 1250, the city’s walls were demolished, and were subsequently rebuilt during the rule of the Ottoman Empire.

The Ottomans lost the city to the British during World War I and it was to be included in an international zone under the 1947 United Nations Partition Plan for arab local. Jordan occupied the city in the 1948 Arab-Israeli War, and it was subsequently occupied by Israel in the 1967 Six Day War. Israel has retained control over the entrances and exits to Bethlehem, though day-to-day administration has been under the purview of the Palestinian Authority since 1995.

Modern Bethlehem has a Muslim majority but is also home to one of the largest Christian communities. The Bethlehem area includes the towns of Beit Jala and Beit Sahour, as well as the refugee camps of ‘Aida and Beit Jibrin. Bethlehem’s dominant economic sector is tourism which is particularly high during the Christmas season as the city is a Christian pilgrimage center, being home of the Church of the Nativity. Bethlehem has over thirty hotels and three hundred handicraft work shops, employing several of the city’s residents. Rachel’s Tomb, an important Jewish holy site is located at the entrance of Bethlehem.